A Wedding At The Union League – Four Years In The Making 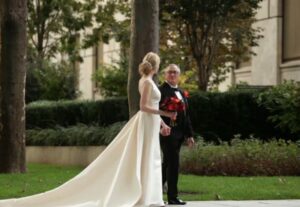 After being together for “four years, nine weeks, three days and 19 hours,” Meagan & Michael finally tied the knot before friends and family at the Union League of Philadelphia.

Our filmmakers were there from the beginning to document the preparation before the ceremony, and the stunning footage kept rolling all the way to the end of the reception. Our friends at Philip Gabriel Photography were there to get great shots of Meagan & Michael in front of City Hall and the Art Museum, along with indoor shots of the couple in the Union League’s Four-Diamond hotel The Inn.

Michael’s son stood by his side serving as his father’s best man, while Meagan’s sister served as her Maid-of-Honor and walked her down the aisle. At the end of the night, Meagan & Michael – who are known as “M&M” – cut into an adorable wedding cake featuring a bride and groom M&M cartoon candy wedding topper. The newlyweds loved it just as much as their guests did!

Congratulations Meagan & Michael, and may all your days, weeks, months and years together be filled with a tremendous amount of love! Thank you for allowing the Allure Films team to capture your stunning wedding at the Union League!

Winter Elegance At The Union League

The entire day was filled with laughter and plenty of fun. Even the first look gave us a giggle, with Brian’s adorable backwards wave as he heard his bride walking toward him.

Brian and Francesca’s wedding party was a blast to be around, and we captured plenty of smiles and laughs in our “getting ready” footage. Francesca looked stunning in her wedding dress, with a fur coat to keep her warm and snug in Philadelphia’s frigid winter temperatures.

The wedding took place at the Union League. Located in the heart of Philadelphia, it is one of our favorite places to film. There are so many beautiful rooms, soaring ceilings, jaw-dropping chandeliers, and impressive architectural accents that make every angle amazing. Documenting a romantic kiss on the iconic twin staircases is a must, and as always, we were not disappointed by the outcome of that perfect shot!

As if the venue wasn’t stunning enough, Carl Allen Floral Designs took everything up a notch. Between their stunning arrangements, the upbeat live music from EBE’s Dreamtime, and the fabulous bride and groom, the wedding was truly picture perfect!

Enjoy this short preview from Francesca and Brian’s big day:

Congratulations, Francesca and Brian, and thank you for letting Allure Films be a part of your wedding day!

Love, Laughter, And Plenty Of Patriotism At A Union League Wedding

What an overwhelming day filled with love!

As members of the United States Air Force, the beautiful couple carried a patriotic theme throughout their wedding. Red, white, and blue dresses, flowers, and even the wedding cake kept everyone feeling festive and the venues looking incredible.

Christine and Evan exchanged their vows at the stunning Cathedral Basilica of Saints Peter & Paul, right at the heart of Philadelphia. Afterward, they were whisked away to some of Center City’s most amazing locations, where our friends at Philip Gabriel Photography snapped photographs of the entire wedding party having fun. 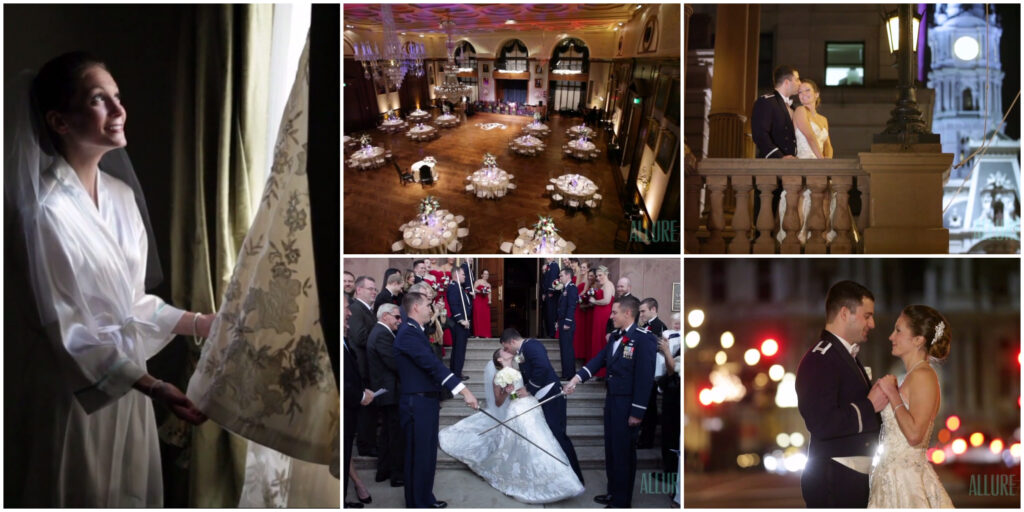 After sneaking several kisses underneath the new “AMOR” sign at the top of the Art Museum Steps, the newlyweds moved the party to The Union League of Philadelphia. With more than 150 years of history supporting the United States military, it was the perfect place for Captain and Mrs. Farren to celebrate their marriage.

From the lively music by EBE Dreamtime to Evan’s one-of-a-kind Eagles party shirt hidden under his uniform jacket, the fun-filled reception was definitely one for the books.

Congratulations to the newlyweds! Thanks for letting the Allure team be a party of your special day! Enjoy this preview from Christine and Evan’s Union League wedding:

Capturing Every Smile From The Suburbs To The City

Join Cristine and Brian for a short glimpse of their spectacular Philadelphia wedding! From the suburbs to the city, this couple made the most of every last second of their big day.

Our lovely bride and groom exchanged vows at St. Thomas of Villanova. Their contagious smiles throughout the wedding prep and ceremony kept everyone else smiling, including us! The Allure Films team could feel the excitement as both Cristine and Brian got ready with their wedding party. 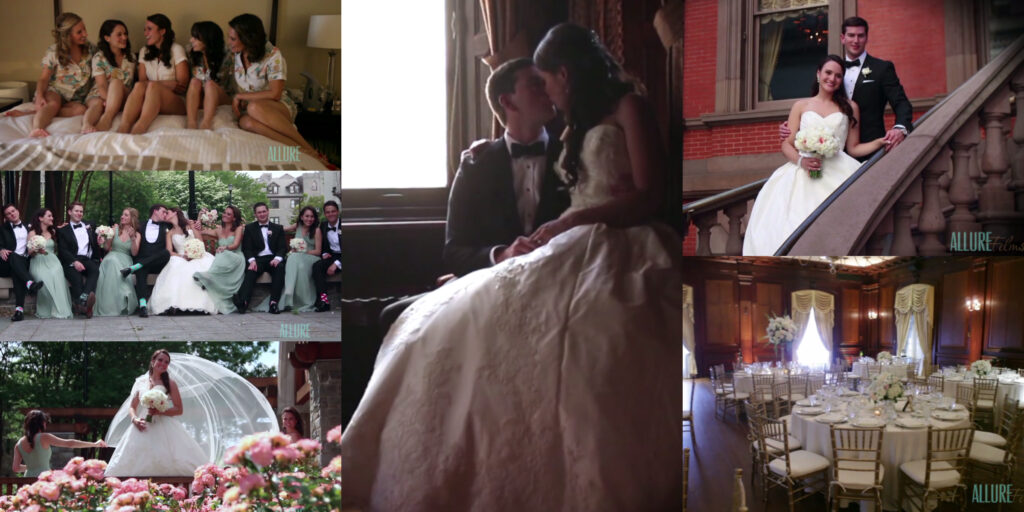 After the ceremony, Cristine and Brian shared a gorgeous and fun-filled evening of dancing and dining at The Union League of Philadelphia. This elegant venue was the perfect scene to celebrate such a fabulous couple!

It was easy to tell from the heartfelt words of family and friends that these two truly have something special. Congratulations, Cristine and Brian, and thank you for letting Allure Films be a part of your big day!

Click here to speak with an Allure Films representative about our list of available wedding videography packages.

Enjoy this short preview of Cristine and Brian’s big day:

What a gorgeous wedding day Tina and Mike had! The Union League of Philadelphia was an elegant and beautiful backdrop for this amazing evening. Lamsback Floral Decorators certainly did a five star job carefully arranging the décor. Tina and Mike had their guests smiling from beginning to end as they celebrated their marriage with dancing, food, and fun. Susan Stripling was there photographing each moment as it unfolded. Great job to our friends at I Do Wedding  for coordinating Tina and Mike’s big day. Congratulations newlyweds, and thanks for allowing the Allure team to capture your big day. 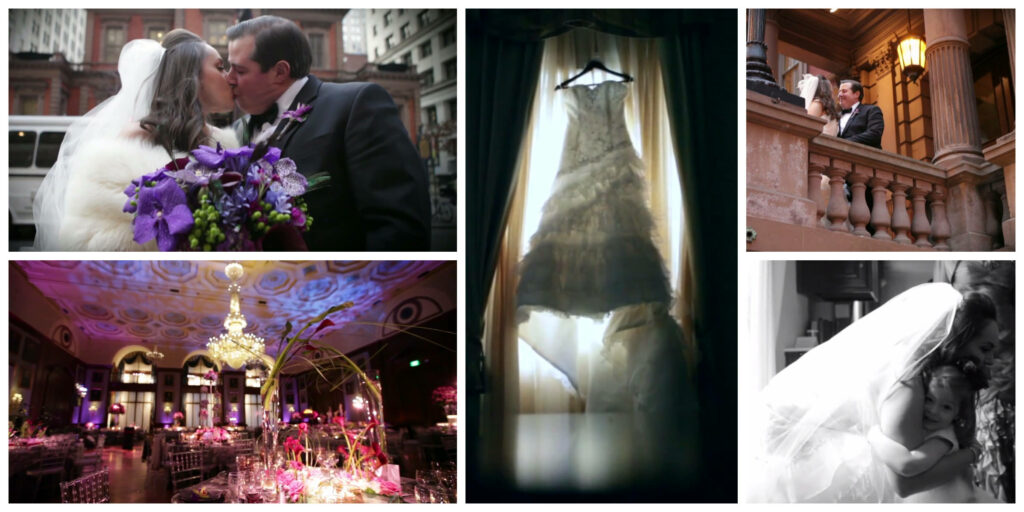 Join Kiera and Paul for a preview of their Philadelphia wedding at The Union League. This adoring couple said their “I dos” at Old St. Joseph’s Church, and followed with an evening of celebration at The Union League. This elegant venue was the perfect spot for such a beautiful celebration. Guests danced the evening away to tunes by Janis Nowlan Band. Many became teary-eyed when Kiera’s father gave a beautiful toast. We were thrilled to capture all of the magic on Kiera and Paul’s wedding day. Congrats newlyweds, and thanks for allowing the Allure Films team to join you on your big day! 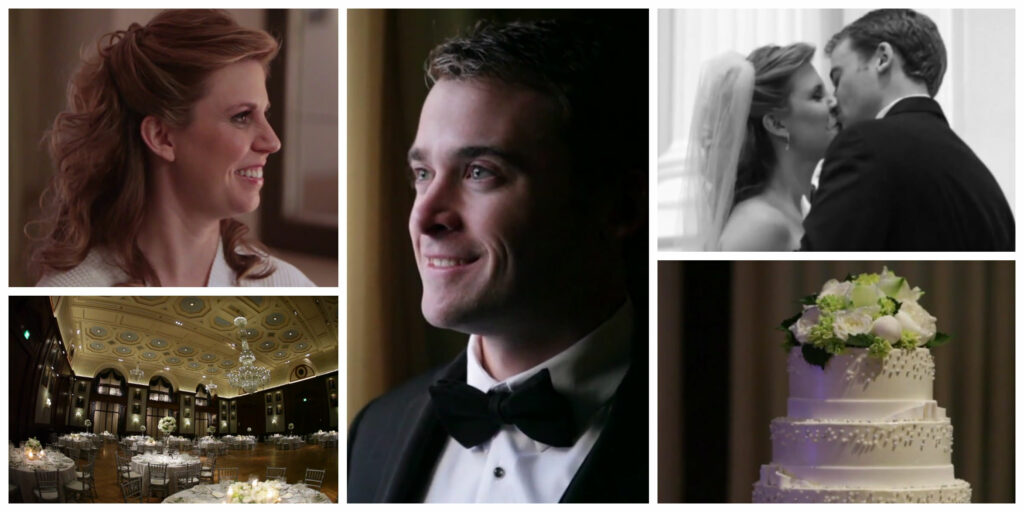