You’ll Fall In Love With This Stunning Rittenhouse Hotel Wedding

Brittany and David’s Rittenhouse Hotel wedding was a day filled with love, laughter and plenty of Penn Pride!

As young college freshman at the University of Pennsylvania, Brittany and David were introduced to an education and a love they would share with one another for an eternity beyond those next four years. Since the city of Philadelphia is where these two college sweethearts first met, it was only fitting that Brittany and David came back from NYC to tie the knot at the city’s celebrated and historic Rittenhouse Hotel.

Allure Films and Cliff Mautner Photography were at Brittany and David’s wedding to photograph and film beautiful moments between the couple and their wedding party inside the hotel, as well as outside against the picturesque backdrop of Rittenhouse Square Park. Both the ceremony and reception took place in the hotel’s ballroom, which was magically transformed while guests enjoyed cocktail hour. Philadelphia’s Evantine Design team were behind all of the spectacular floral arrangements, including the gorgeous hanging floral display that served as the couple’s chuppah.

After the beautiful ceremony, everyone let loose on the dance floor and hammed it up for the photobooth station, which provided tons of fun props and buttons with sayings such as “PENN IS MY HAPPY PLACE.” When the guests were wiped out from taking photos and dancing, they were sure to stop by the bagel wall! David’s company, Schmear It, provided a wide variety of bagels and “Schmear” to satisfy the guests’ biggest cravings.

Brittany and David, Mazel Tov and Go Quakers from all of us at Allure Films! 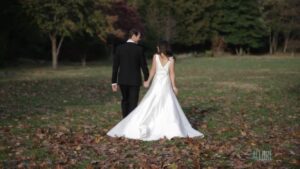 You know that old saying, “Opposites attract?” Well that statement definitely holds truth when it comes to describing Lindsay & Daniel. According to Lindsay’s sister Shelby “Lindsay is the small East Coast vegetarian who is the perfect complement to Dan, a tall, blonde-haired, football- and steak-loving Texan.” Clearly, they are a match made in heaven!

After meeting in Seattle six years ago, Lindsay & Daniel headed back East and teamed up with Lauren James Events to plan what was to be an unforgettable wedding held at The Logan in Philadelphia.

The Allure Films crew arrived at the hotel to capture the heartwarming exchange between the bride and groom during their First Look. There’s nothing like documenting a First Look between the bride and groom before their wedding, and thanks to the magic of film, Lindsay & Daniel can press the rewind button on this moment for the rest of their lives. Cliff Mautner Photography was also on hand to get stunning images from the entire day.

It’s always amazing to see everyone come together to transform a hotel ballroom from a space fit for a ceremony to a space fit for a reception. Jamie Rothstein Floral & Event Design were the creative visionaries behind all of the wedding décor elements. We were in awe of the couple’s ivory floral-adorned chuppah.

The reception was a big celebration filled with plenty of great speeches and friends and family dancing to Starlight Music. The dance floor was packed the whole night, and everyone had a blast, including the happy couple.

Mazel Tov Lindsay & Daniel, and here’s to a lifetime of lots of love and happiness!

Allure Films by Video One Productions was happy to be a part of Jamie and Jason’s Westin Philadelphia wedding. They even had a furry friend join them! Cliff Mautner Photography was also a part of capturing the magic from this lovely day. The newlyweds enjoyed an evening of celebrating, dancing, and fatherly advice. The guests rocked out to Eddie Bruce Music all through the night. Jamie and Jason sure know how to throw a party, and Allure Films was surely glad to be in attendance. A big thank you to our newlyweds and congratulations on your marriage!

Join Video One for a short preview film from Andrea and Harris’s fairytale wedding at The Westin Philadelphia. Evantine Design transformed this (already) beautiful venue into a gorgeous sea of colorful decor. Cliff Mautner Photography photographed every special moment shared between Andrea, Harris, and their guests. EBE-L.A. Starz played fantastic music all night long that kept the dance floor rockin’. Congratulations to newlyweds Andrea and Harris from Video One.

Erica & Carl’s Wedding at The Rittenhouse

Video One was honored to capture Erica and Carl’s enchanting wedding at The Rittenhouse Hotel. With it’s ravishing setting, and beautiful décor by Evantine Design, Erica and Carl’s wedding was one of a kind. It was a pleasure working with Cliff Mautner Photography in documenting Erica and Carl’s special day. With upbeat tunes from Eddie Bruce Band, the guests couldn’t resist the dance floor! View a short film from this special wedding below. Congratulations to newlyweds Erica and Carl!

With it’s intriguing historical background, the Cairnwood Mansion provided an excellent location for Laura and Kevin’s wedding. Watch the excitement shared between these lovebirds as their wedding day unfolds. Cliff Mautner Photography caught all the magical moments from this great wedding. Synergetic Sounds kept the crowd on their feet with great music. Become a part of this memorable day by checking out the preview clip below. Congrats to Laura and Kevin from Video One!